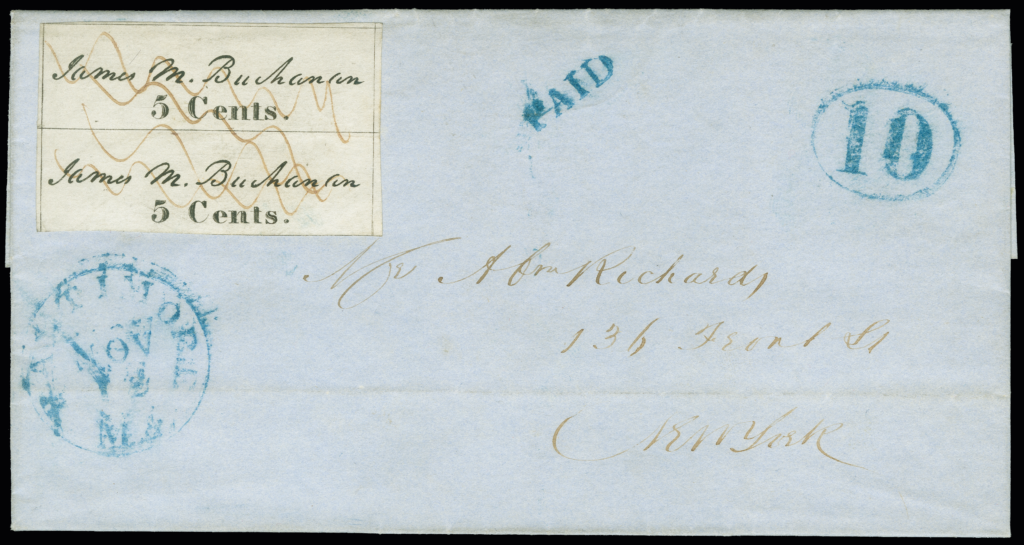 Vertical pair, positions 4 and 6 of the setting of 12, full frame lines at top, left and right plus the frame line showing along half of the bottom margin, manuscript cancelled on November 12, 1846 folded letter datelined “Balt Nov 12th 1846” and addressed to “Mr. Abm. Richards, 136 Front St., New York (City),” blue Baltimore, Maryland town marking at lower left, matching straight line “Paid” and “10” in oval, Very Fine in every respect; listed as number 17 on the Hayes census; only two covers known franked with a pair, this being the finer of the two.

According to the census published by the United States Philatelic Classics Society, there are only two pairs of the 5c Baltimore provisional, both on white paper and both on folded letters. The other cover (which has a pre-use crease between the stamps) was postmarked March 21, 1847 and is addressed to a Miss Mary Floyd in Port Tobacco, Maryland. Both covers were referred to by J. Murray Bartels in a 1928 article in the Collectors Club Philatelist (Vol. VII, No. 3); since that date, not a single additional example has been discovered. All double-rate covers bearing Baltimore provisionals are exceedingly rare; the Siegel Census for the 10c issues records only six covers (five on white paper, one on bluish) and one piece (on bluish). This cover has long been recognized as one of the most spectacular items not just amongst Postmasters’ Provisionals but in all of United States philately.