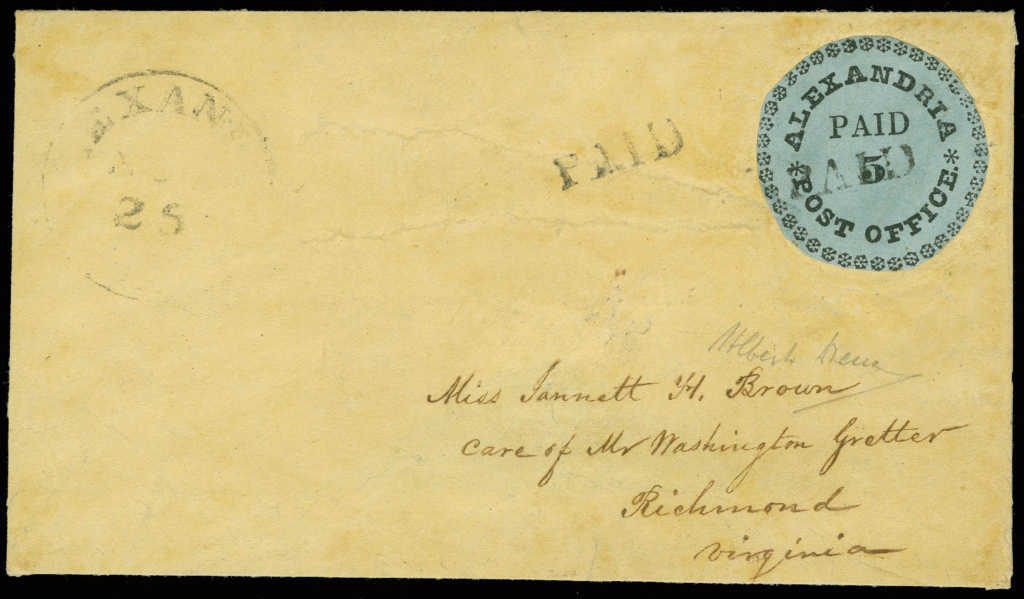 Cut to shape (as is always the case with Alexandria provisionals), stamp cancelled but not tied by straight line “Paid,” matching second strike at left, “Alexandria D.C. Nov. 25 [1847]” town cancel, addressed to “Miss Jannett H. Brown” in Richmond, Virginia; described in the first R.A. Siegel Lilly sale as having been “neatly restored,” cover with some obvious sealed tears and other minor faults that do not detract from world-class rarity, still Very Fine, the only stamp of its kind either on or off cover and arguably the greatest icon of American philately, celebrated the world over by collectors since its initial discovery over 110 years ago and only reappearing at public auction for the first time in 52 years

The story of the Alexandria “Blue Boy,” the icon of American philately, has been told so many times that surely most collectors can recite the basic details by heart. However, it is a story so moving and so romantic that we think it would be a disservice not to recount it here once again.

But first, a word about the stamps themselves. The Alexandria provisionals, issued by Postmaster Daniel Bryan, were printed from a typeset with two distinct settings. Although they are nearly-identical, Type I has 40 rosettes around the center inscription while Type II only has 39. Both read “Alexandria Post Office” with “Paid 5” in the center. There are six surviving examples of the Alexandria provisional printed on buff colored paper, three of each type. The unique Alexandria “Blue Boy” is a Type I stamp. It is widely believed that the stamps were printed by Edgar Snowden at the office of the Alexandria Gazette, whose office was nearby the Alexandria Post Office.

The letter originally contained inside of this envelope was datelined November 24, 1847. Its writer, Mr. James Wallace Hooff, was a Presbyterian. Its addressee, Miss Jannett Hooff Brown, was an Episcopalian (and also his second cousin). In a real-world imitation of Romeo and Juliet, the watchful eyes of their family prevented the young lovers (then 24 and 23, respectively) from expressing their feelings openly.

Hooff wrote, in part, “The reasons you give for not writing often, are good, for your cousin Wash. will be certain to say something, if you give him all your letters, to put in the office. But whenever you think you can write me a line without exciting the attention of your coz. Wash, do so, for it gives me a great deal of pleasure to receive a letter from you, even if it is only a short one.” Presciently, he continued, “Mother laughingly remarked ‘That if there was any love going on Aunt Julia was sure to find it out,’ and while making that remark, I think, looked at me, but I continued reading, as if what she said did not apply to me in the least.”

Most remarkable is the last line of Hooff’s letter, which simply reads: “Burn as Usual.” The circumstances behind Brown’s decision to keep this letter, and none other from the correspondence, only serves to add an incredibly air of mystery to what is already the most romantic of covers.

Six years after the “Blue Boy” was sent from Hooff to Brown the couple was finally able to marry, and they went on to have three children together. For more information on the remarkable and serendipitous reunion of the “Blue Boy” envelope with its contents we recommend the indispensable The Alexandria Blue Boy: The Postmaster, the Letter, and the Legend by May Day Taylor, whose scholarship and research led to the uncovering of Hooff’s letter in 2006.

The early history of this incredible stamp was documented in a 1923 Collectors Club Philatelist (Vol. 2, No. 1) by the man who first made the cover’s existence known to the philatelic community, J. Murray Bartels. As his is a firsthand account, we hardly feel like we can improve on his words:

“The letter is addressed to Miss Jannett H. Brown, care of Mr. Washington Gretter, Richmond, Virginia. It was written by a Mr. [James Wallace] Hough [sic] to his fiancee Miss Brown, who later became the mother of Mrs. Fawcett (widow of Dr. Fawcett of Alexandria, well known to the writer). It was found by her about Nov. 10, 1907. Mr. Hough was at that time and for several years later in the government service in Washington, though he lived with his daughter on Prince St., Alexandria, where the stamp was found.

“Mrs. Fawcett had heard of the successful sale of the Lambert Collection (as Mr. Lambert had lived only a few doors below in the same street) and wrote practically verbatim the following letter:

My Dear Sir:
At the suggestion of a Mr. ———— of the Citizens National Bank of this city, I am writing you in regard to a rare stamp I have recently found. It is an old Alexandria stamp with Paid 5 and surrounded by a circle of stars, printed on old blue paper. It is on a letter to my mother. A local expert to whom I showed it tells me it is worth $200. If you are interested in it please let me know what you would pay for it.

Yours truly,
(Mrs.) Jannett B. Fawcett

“We replied promptly, asking her to send the stamp for inspection, stating that if as described it was undoubtedly very valuable. Unfortunately we did not take the next train for Alexandria but waited until it was too late. Mrs. Fawcett sent the stamp to her cousin, a Mr. Brown in Philadelphia, requesting him to finish the transaction with our firm as he represented her in all business deals. Luck was against us. Mr. Brown happened to be also the attorney for a Philadelphia stamp concern and he naturally thought it might be much handier to have his client handle the matter than to send the stamp to a stranger in Boston.

“After some traveling and waiting, the writer made an offer of $3,000 for the stamp. This was of immense benefit to the owner as she finally obtained this price less a modest 5 per cent. commission and Mr. Worthington became the owner shortly before Christmas in 1907.

“The sale of this stamp was published far and wide throughout the U.S. and Canada. Mr. Worthington was overwhelmed with hundreds of letters offering him common stamps at huge prices, rare coins, antiques, grandfather clocks, old bed quilts and other miscellaneous articles. The writers had received the impression that he was a man who had more money than he could possibly spend intelligently and wrote accordingly.

“The newspaper articles invented stories about the money furnishing a trousseau for Mrs. Fawcett’s daughter and other fanciful tales. We will cut a long story short by simply stating that the $2,850 was a great thing for the Fawcett family who were in meagre circumstances.
In 1916 with the breaking up of the Worthington Collection this stamp was acquired at private sale by Henry C. Gibson of Philadelphia and has since passed into the possession of a collector whose name is withheld.”

The press did indeed develop a fascination with the “Blue Boy,” as Bartels claimed, and for the first half of the 20th Century it made frequent appearances in newspapers as one of the world’s rarest stamps. When the “Blue Boy” was shown at the 1913 International Stamp Exhibition in New York as part of Worthington’s collection, the press reported that it was now worth $5,000. In 1922, the New York Times stated that “if offered for sale it is believed it would bring $10,000 or more.” The stamp continued making headlines with its sale as part of the Alfred Caspary Collection in 1955, the year after it appeared in Life Magazine’s “World’s Rarest Stamps.”

The last time the “Blue Boy” appeared at public auction was in the 1967 sale of the Josiah K. Lilly Collection by R.A. Siegel. In the ensuing half-century the cover has changed hands several times, but always in private and often with conflicting information available.

The uniqueness of the “Blue Boy,” combined with the incredibly unlikely and romantic story of its use and eventual preservation, make this a singularly celebrated and desirable cover in all of American philately. By all accounts, this cover should have met the match like all of Mr. Hooff’s other letters to Miss Brown; the fact that it survived the end of 1847, let alone all the way to 2019, is nothing short of miraculous.

The “Blue Boy” is much more than just a postage stamp. It is a story of star-crossed lovers. It is an icon of philately that has captivated generation after generation. It is a void that has plagued the albums of all but a handful of collectors. It is, in short, a thread in the fabric of American history, and the opportunity to own such items only rarely arises. We are honored to be the ones to return this remarkable item once again to the philatelic marketplace.